TIME TO GET ILL

A lot to talk about regarding INDUSTRIAL ACCIDENT and the film festival circuit that we are now neck deep into.
Before we get into some past, present and future news, I wanted to again address a question that we keep getting, A LOT. Some of this has been repeated many times but hey, some folks are just finding out about the documentary so it makes sense that we might have to go over this a few more times.

Q: “The film is done so why can’t I download, stream or buy a Bluray or DVD of INDUSTRIAL ACCIDENT now?  Are you guys crazy? I’m trying to give you my money and you won’t take it.” What a shitty way to treat your fans, you guys suck! (Yes, people actually have sent us hate email because we can’t sell them the DVD right now)

A: Trust us, nothing would make us happier than to usher this film through the ultimate finish line and make it available for purchase. Some people may not understand everything that goes into creating a project like this and then getting it to mass market. We legally can not sell this movie until we pay for the proper licenses for music in the film. Will that happen? -We hope so. But this is such a complicated process that it continues to be an uphill climb.

Q: Then why did my friend Carl just buy a ticket and see it at Rooftop film festival?…And speaking of “Film Festivals”, why are the screenings at all these festivals that don’t make sense? I mean come on…You screened in Cape Cod and didn’t screen in (insert bigger city here) – WTF? What a shitty way to treat your fans, you guys suck! (<sigh>Yes, people have actually sent us hate email about this too because there are no screenings by them)

A:  Part 1, We have paid for all the music in the film under something called a festival license. Typically it allows the filmmaker to show the movie publicly at festivals as they look for distribution, buyer, investor, etc. to help with funding for the much larger commercial license. The downside of this kind of license is we are contractually obligated to screen only at festivals. Our festival license will run out in 2019. Let’s hope we can acquire the funding to take this to the next level.

A: Part 2, Just to clarify again – We don’t pick the festivals, the festivals pick us. If we get passed up by let’s say a Texas festival, there isn’t a lot Wax Trax! can do about it.

-Just trying to be as transparent as possible. Hope that helps.

NO SLEEP TILL BROOKLYN

We want to thank everyone who came out to our ROOFTOP FILMS screening in Brooklyn just over a month ago. We sold out the HOUSE OF VANS with over 900 Wax Trax! fans spread out in front of two screens. The response to the collector’s pop-up shop and archive gallery exhibit was incredible and we met so many amazing people throughout the night. Thank you!

You can read more about the Brooklyn event at REVOLVER magazine. 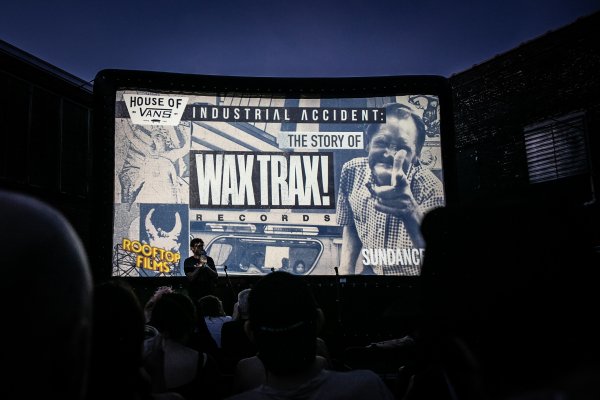 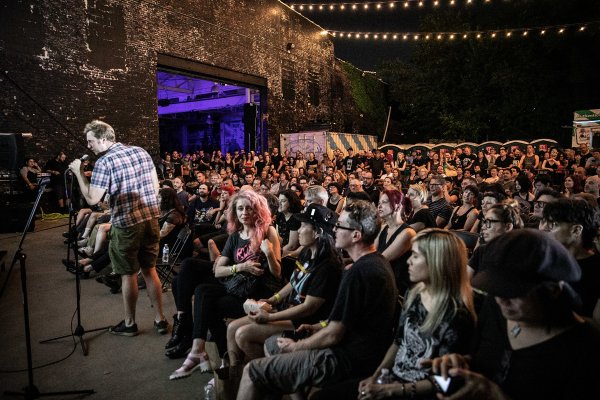 In the weeks that followed NY, we were able to get the film in front of fans in Massachusetts and then all the way over in Belgium. It has been a wild global ride and it ain’t over!

What is next?… How about Greece, Switzerland, Northern UK, Canada, Spain, California, Michigan, Washington, Arizona…and of course Chicago?

Starting this week we have some very special screenings planned taking place all over the world. If you have been wanting to see this film and you will be in any of these areas, we strongly suggest checking out some of these festivals as we start a two month Blitzkrieg across the globe. As I’ve said above, there is no guarantee that we will be able to release this film commercially due to music licensing costs. It may be to only chance to see INDUSTRIAL ACCIDENT: The Story of Wax Trax! Records. You snooze, you may lose!

As part of a special encore screening the documentary was also selected for this year’s COLD WAVES FESTIVAL here in Chicago. The film is scheduled for Sept. 22 & 23 and will also include a special Wax Trax! collector’s pop-up shop in the METRO box office during all 3 days of the fest. In addition, a complete list of festivals and documentary news can be found at WAXTRAXFILMS.COM

FIGHT FOR YOUR RIGHT

We still have a few more things up our sleeve and will be announcing more screenings in the next few weeks.
However, it is really you the fans that have the power to drive this film to a festival near your town. As I have mentioned before, we do not pick the festivals, the festivals pick us. If they don’t think there will be an audience, they may not want to take any risks.
This is not a complete list by any stretch and if you know of a festival in your area that runs between now and spring 2019.
Send them an email and let them know that the story of Wax Trax! Records does indeed need to be told at their festival.

Let your voice be heard. Click on the fest near you and ask them to program INDUSTRIAL ACCIDENT: The Story of Wax Trax! Records

US – SAN FRANSISCO/ ANOTHER HOLE IN THE HEAD

For some non-movie news, how about all the amazing new releases, tours and projects by a ton original Wax Trax artists?

Don’t forget to check out new merch at the Wax Trax! online store and please join the conversation at the official Wax Trax! facebook, twitter, and instagram